“The participants have grown from being uncertain of how to react, to becoming more confident and comfortable in expressing themselves.” – Christine, SAMH Caseworker
November 5, 2020
by Akanksha Raja

It has been two months since rehearsals commenced, and about a month since I started attending them. Over the six sessions that I’ve attended so far, rehearsal sessions have expanded in duration, the playtext has morphed and evolved through the course of devising, the participants have grown more intimate with their characters, and the team completed their first full run of the production on 21 October! 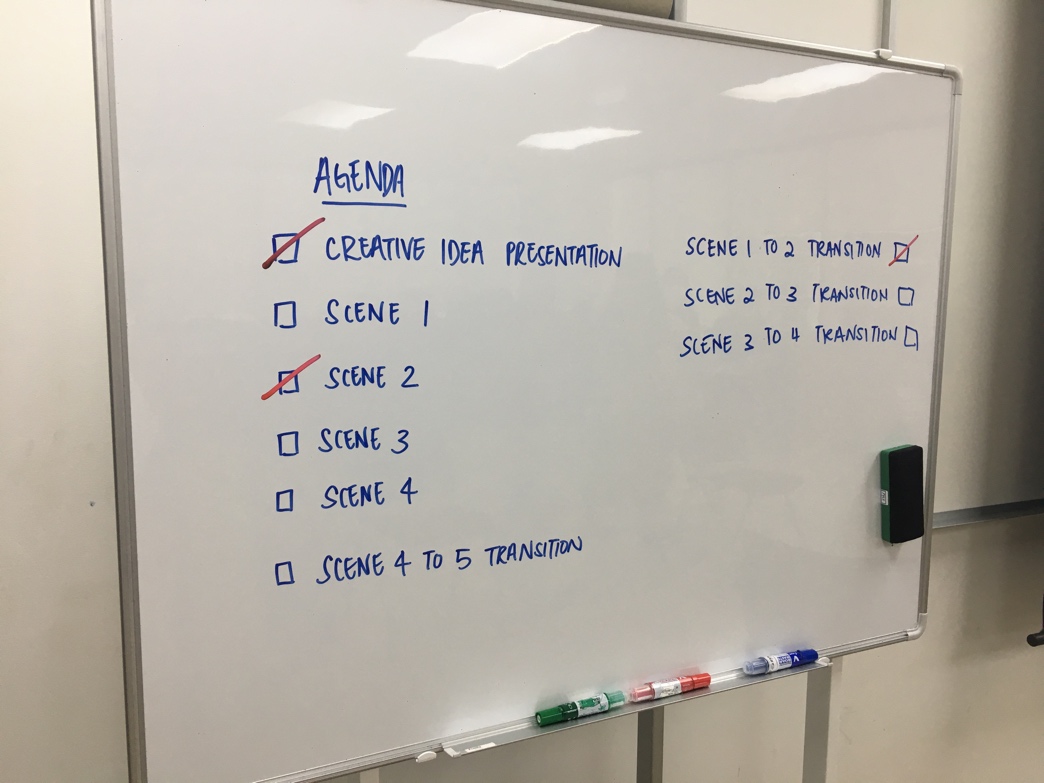 The first few rehearsal sessions I attended were driven by performance exercises and games, playfulness and spontaneity. Now, the agenda for each session consists of a rigorous list of scenes to practise and finesse. The challenge for the performers is to find the balance between the stress and pressure of nailing the dialogue, blocking, and transitions, and retaining the simple pleasure of storytelling. Just before the team’s first full run, director Shalyn reminded the group: “Things are getting more serious, but let’s not lose our sense of joy and fun – the joy and fun that we’ve created in this space, and will be sharing with the audience later on.”

Rehearsing in the safe and protected space that the team has collectively fostered at SAMH, the participants, co-actors and crew members have forged strong bonds with each other and the openness and confidence to perform alongside each other. The next layer of preparation is to gradually acquaint the team with the technical, sensorial elements of the production that will come into play during the actual filming process in mid-November.

The team scheduled a series of sessions in mid-October dedicated specifically to introducing the lighting and sound elements of the production – this served to help accustom participants to the many (sometimes rapid and intense) changes in sound effects or lighting effects that can place during the production. For example: sometimes during stage performances you may have multiple strong spotlights, in different parts of the stage, blacking out in a second, followed by a gradual brightening again for the next scene – a series of quick shifts of pace and intensity that can be compounded by accompanying sound effects. These sessions aren’t only for participants to adapt to these many simultaneously moving parts, but also for the lighting and sound designers whose decisions will take into consideration participants’ needs and preferences.

This process of introduction and familiarisation to the technical aspects of production isn’t typical for an end-result-oriented production process or theatre company, but it’s a key aspect of applied theatre projects such as Still Human. Another additional layer of preparation that Shalyn developed was a comprehensive slideshow presentation explaining the creative design of the production. Her sharing, which took about half an hour of a rehearsal session, familiarised the cast with set design and props, and hence to consider how scene transitions may be facilitated effectively and safely so that the audience is seamlessly transported through the different landscapes and scenes of the story. To put this into practice, we were led by co-actor Auderia in an activity which involved moving heavy objects around at varying speeds and embodying different “creatures”.

Through the introduction of these various aspects of staging, the element of the audience was introduced as well. Shalyn shared a video (recorded by the crew) of the actual performance space located at The Artground in Goodman Arts Centre, to help everyone visualise the dimensions of the space. In addition, because this play is to be presented as a filmed performance, she talked the group through the parameters of the filmed space. The floor of the rehearsal room at SAMH was therefore demarcated accordingly using blue tape – a rectangular space upstage to centrestage, and a triangle tapering downstage toward the imaginary audience. 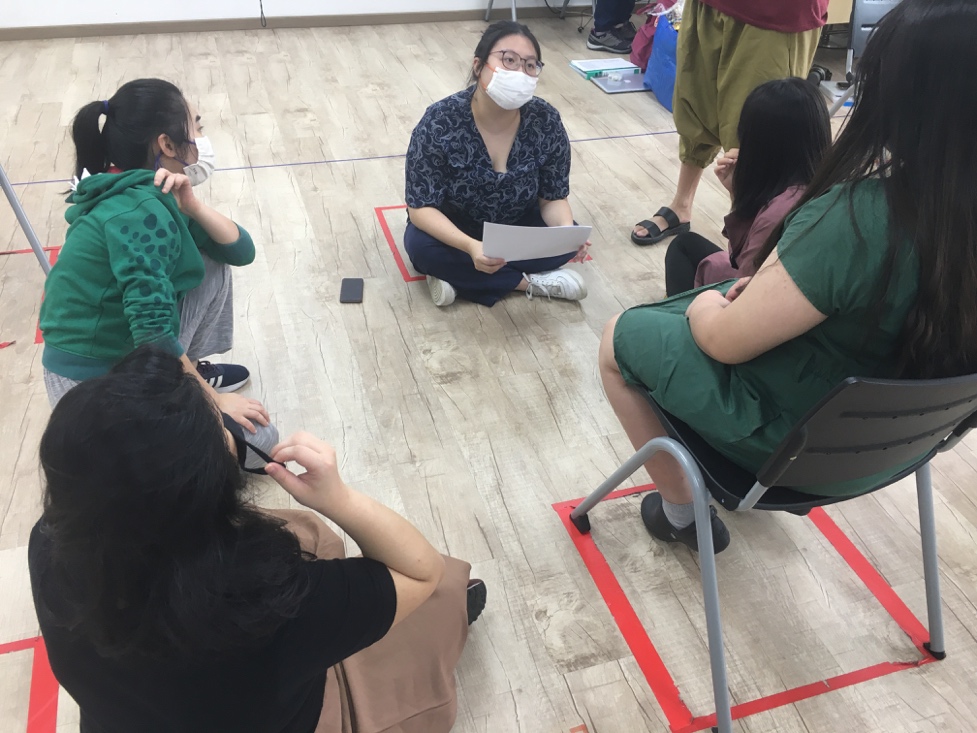 And so, from lighting to sound to the physical, dimensional and spatial aspects of the production – Team Still Human ensured that all participants moved forward with a thorough understanding of each aspect of the process, and that their needs are taken into account in the making of every staging choice.

Other aspects of the production that were negotiated included the choice of casting. It was as much guided by the director’s and playwright’s considerations on the suitability of each actor with each character, as much as it was by the preferences and needs of each participant. The performers also responded to individual questionnaires about the story, their characters, and their personal relationship with the roles they play. As rehearsals intensify, some of the performers are more forthright in asking more about their characters or suggesting different attitudes or tones in which their character would behave in each situation. Rehearsal by rehearsal, each performer is slowly settling into their character and the ability to express themselves through another, and their dedication to the storytelling process deepens. 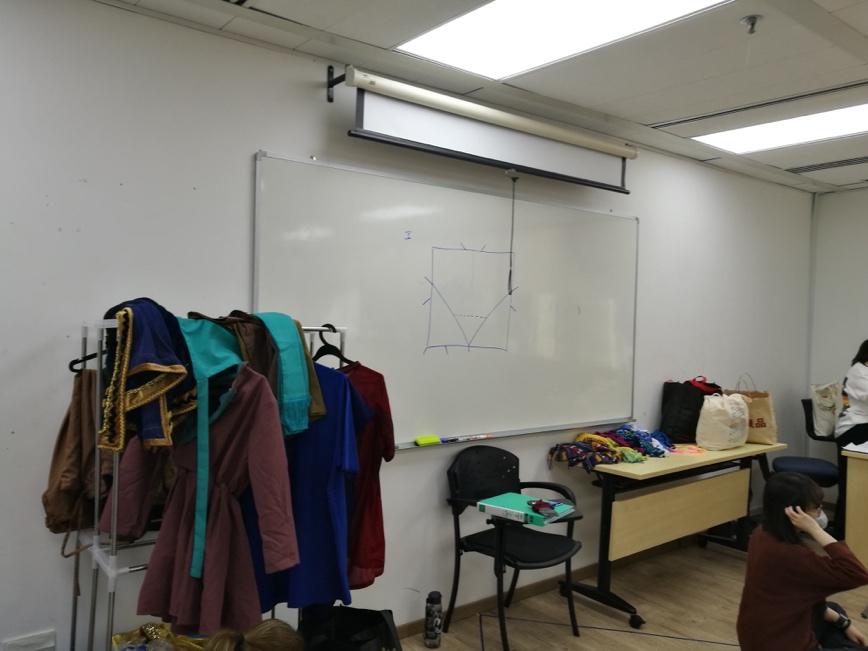 Another part of the production process that got everybody particularly excited was costuming. The choice of costuming also took into consideration the clothing preferences of the performers themselves. Set and costume coordinator Wee Nee had curated dark, slouchy, earthy-toned clothes of browns and forest-greens for the mysterious dwellers of Nagajala – easy to crawl and swing around in, like beasts of the deep wilderness. For the King of Nagajala, it was palette of royal blue and shimmery yellows, and finally, lighter-toned or more practical clothes for the humans in Singapore – for example, the character of Ray, a soccer player, is dressed in sports gear. In contrast to the lightsticks they had been using in previous rehearsals, performing in their actual character costumes and seeing each other in their respective costumes, seemed to immerse all the performers deeper into the thick of the story. 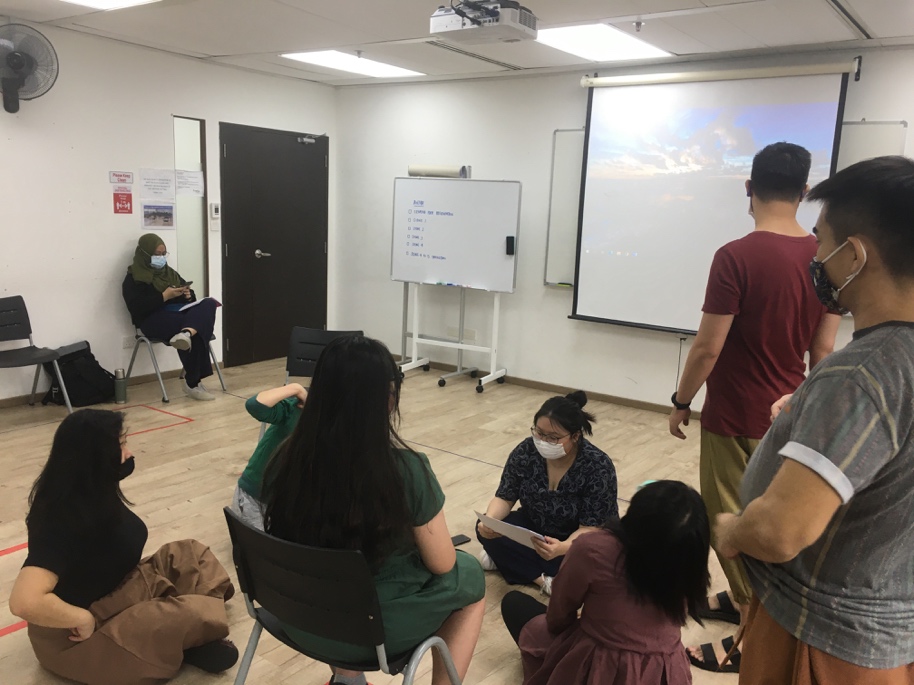 I spoke to playwright Farhanah Diyanah (also known as FD) about the evolution of the script, and how she felt the participants were responding to the story. One of the qualities of the story that I was intrigued by was magical realism – most of the story is set in a fantastical land, and the journey almost seems like a fairytale. I was curious about how the gravity of the theme of mental illness could be carried by a tale of magic and dragon kings.

At the beginning of the production process, FD shared, the idea was that the performance would be steeped in realism. However, during the first session in which Shalyn and FD met the participants and got a better understanding of their inclinations, they discovered that the participants were more keenly engaged in working on fictional narratives. FD also added that she did not set out to write “about mental health” but rather, to try to capture all the struggles that the characters are going through, whether or not directly related to mental health. For example, the themes of stigma and discrimination, as portrayed through the struggle of the subservient creatures of Nagajala, are universal issues, and the underlying insecurity of King Drago who abuses his reign is a relatable example of how and why individuals in power are led to abuse it.

Aside from that, the story does also share some practical aspects of mental health – for example, FD decided to include specific breathing techniques practised by the character who struggled with obsessive-compulsive disorder, to highlight some of the ways those with similar issues or facing periods of anxiety may resolve them.

“I’m proud of the participants for asking in-depth questions about characters’ intentions and motives,” FD shared when I asked her about her conversations with the participants, as rehearsals become more intensive. “They’ve understood the characters better, and the motivations make more sense to them now.”

The Still Human project culminated in Different, a digital presentation that was presented at YOUth Alive! organised by the Singapore Association for Mental Health.