I realised that increasingly often during the sessions, Shalyn had been gently but persistently reiterating the importance of fun to the team: that retaining the pure joy of creating together is the most important part of this process and it should be what they channel to the world during the performance.
December 2, 2020
by Akanksha Raja

The Joy of Creating

Two weeks before Different bumped in to the performance space at The Artground, I was sitting in a meeting room adjacent to the rehearsal room at SAMH, together with co-actors Auderia (who plays Rubie) and Clement (who plays her brother Ray) as they ran through some of their scenes. Specifically, Auderia was working out exactly what her character’s personality is like and how to articulate it: whether Rubie is more petulant and whiny, or proactive and assertive, in the scene in which she confronts the unfriendly creatures of Nagajala and demands to see their king. We watched a few video clips of The Powerpuff Girls for reference, trying to decide which one of the cartoon sisters Rubie was most like (we finally landed on Blossom: a caring sister who embodies boldness, resourcefulness, and moral responsibility.) 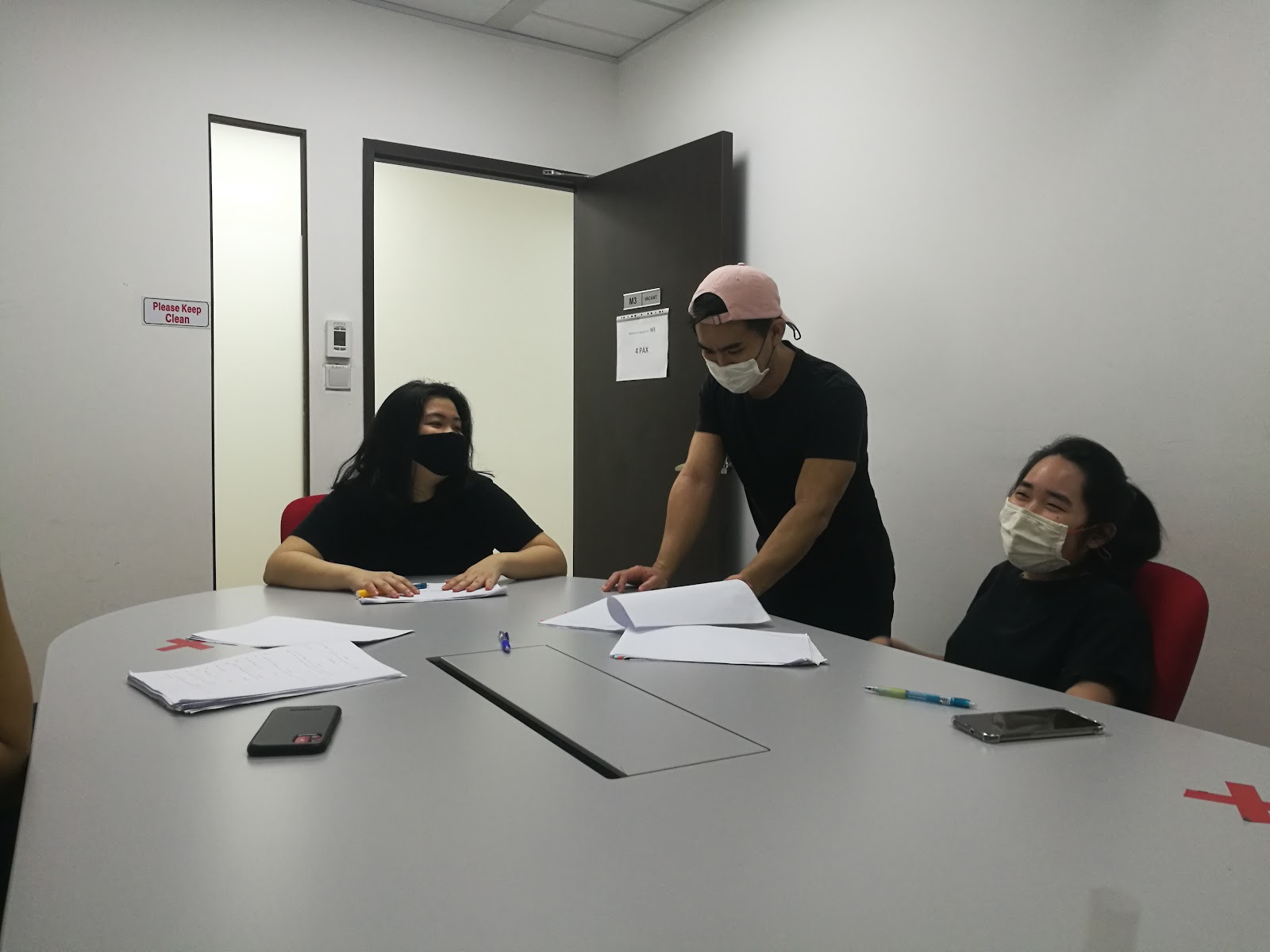 Later, we were joined by Joeve and Shien (who play two of the creatures) as well as Kiyo (who plays the siblings’ friend Gladys.) The performers started to explore different tones and personalities for their roles, taking on each other’s characters to explore different approaches, and soon the mini-rehearsal session ended up in peals of laughter at the various impressions that came up.

This playfulness was the prevailing mood in this final, intensive lead-up to performance week. Yes, rehearsals were getting longer, more meticulous, and exhausting. The performers were inhabiting their characters more deeply. Yet despite heightened tensions in anticipation of the final week, it was heartening to see performers retaining a sense of fun and joviality playing with the story and their characters. I realised that increasingly often during the sessions, Shalyn had been gently but persistently reiterating the importance of fun to the team: that retaining the pure joy of creating together is the most important part of this process and it should be what they channel to the world during the performance. The fast-paced, product-oriented society we live in tends to be more unforgiving of setbacks and perceived failures than rewarding of creative endeavours, which has conditioned a lot of us, artists or not, to inadvertently dismiss or diminish the process of creating, in favour of achieving “good” results. Shalyn is aware of how this conditioning can have a significant bearing on an individual’s mental health, and her reminders guide us to return our attention to the deeper meaning, the intangible value and the embodied spirit of the process. 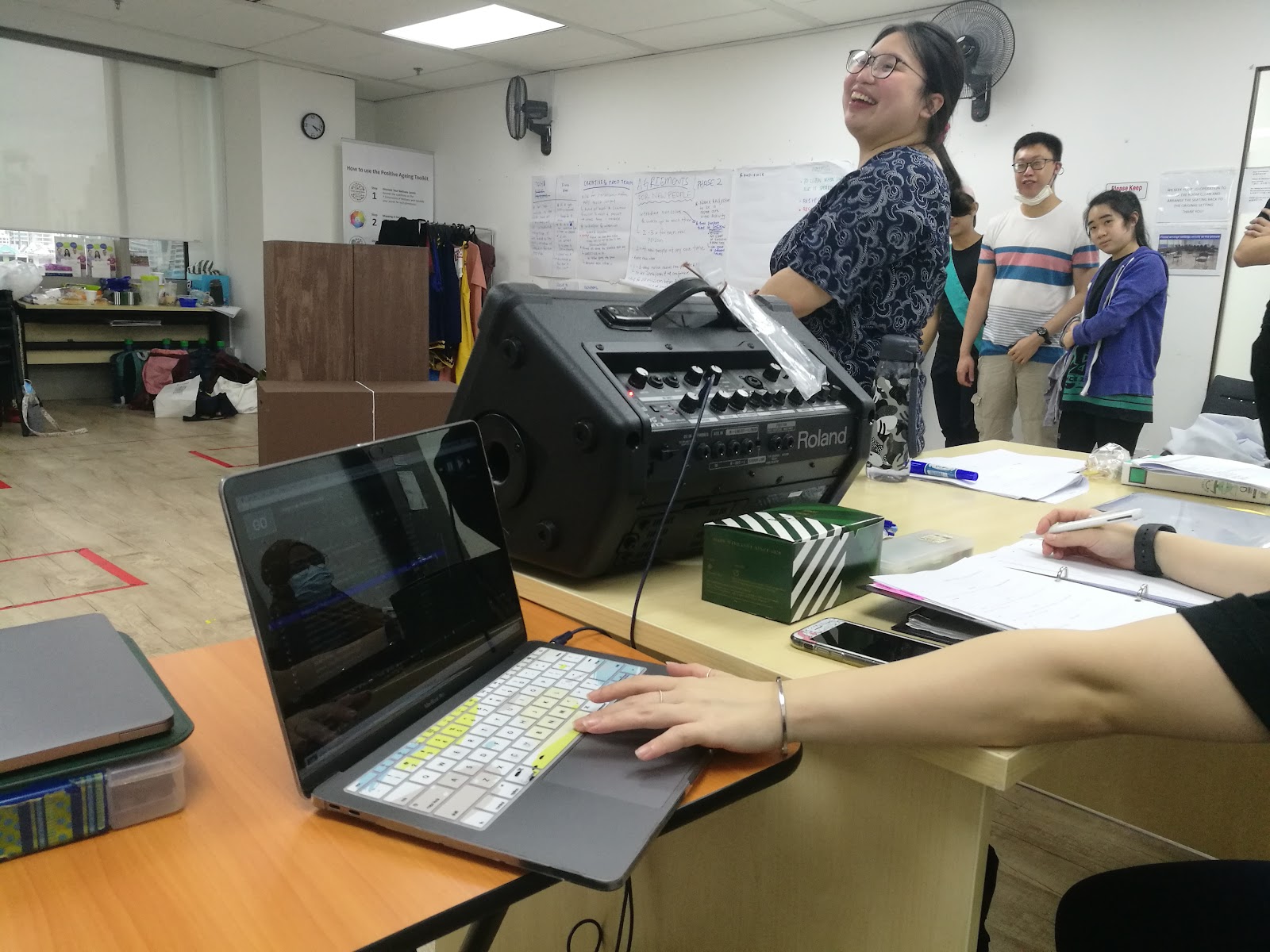 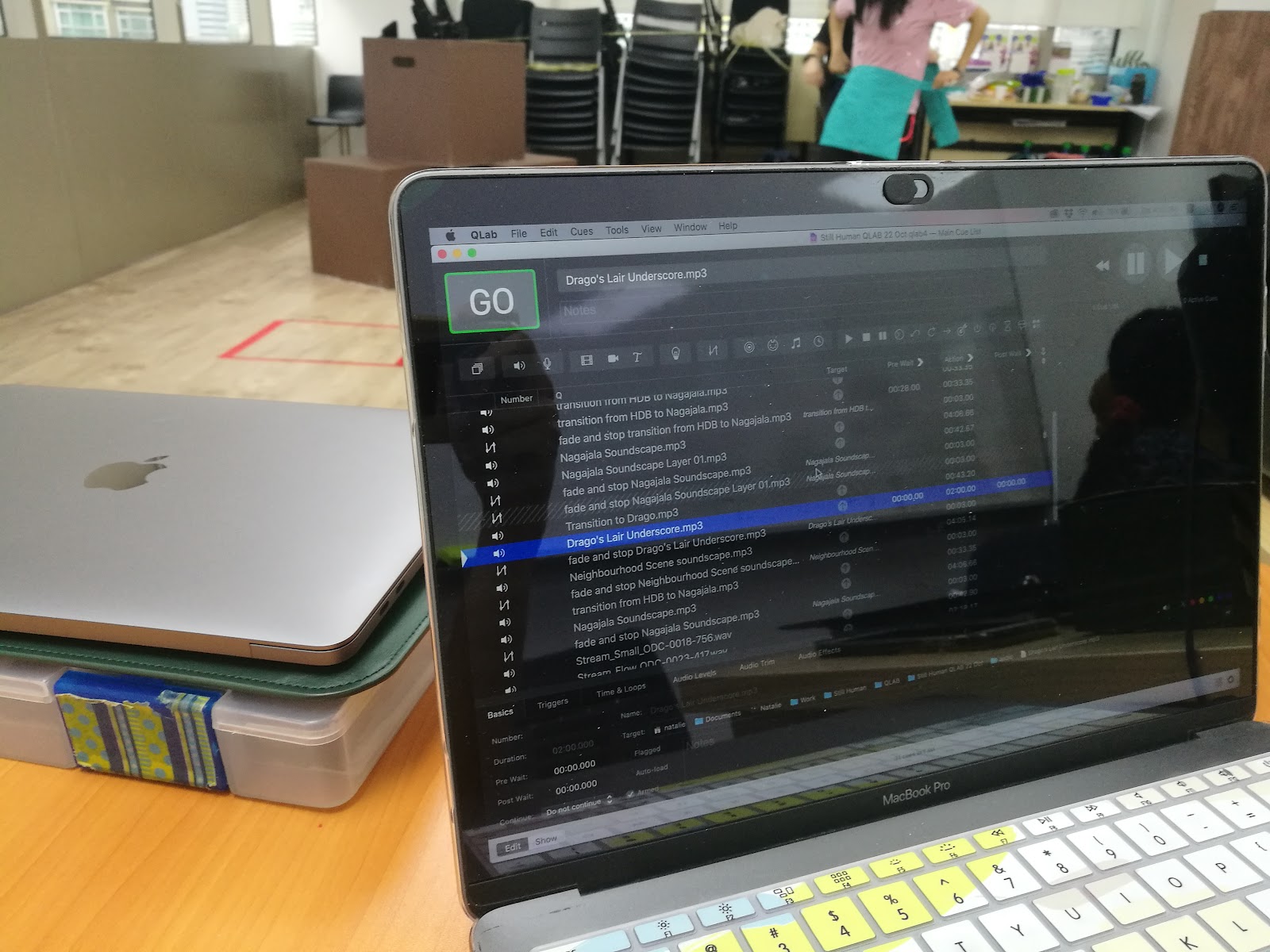 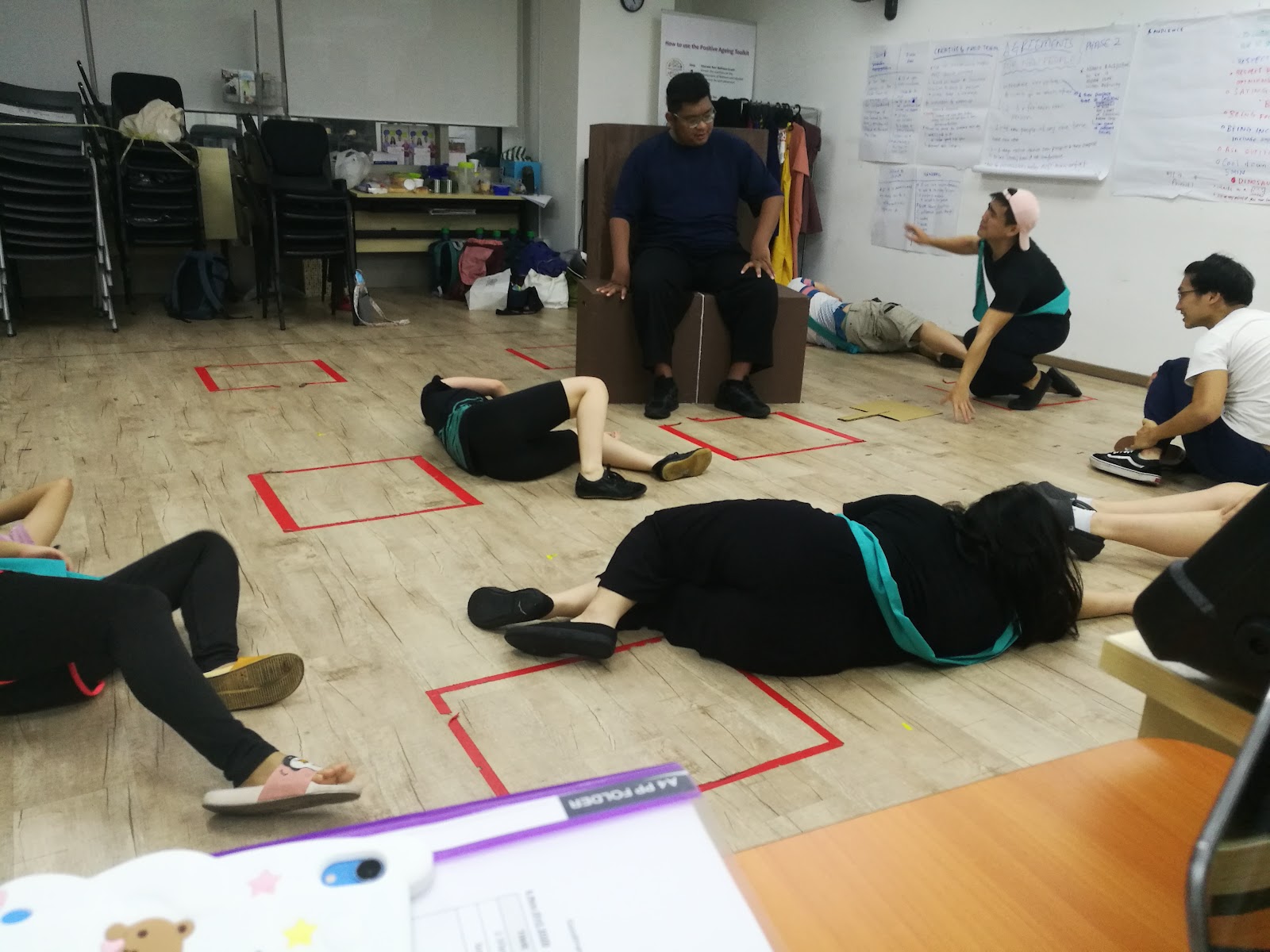 In addition to the intense series of scene-by-scene rehearsals and full runs of the play, these two weeks also consisted of logistical, mental and emotional preparation for tech week. These preparations aren’t usually part of regular theatre productions, but for an applied theatre production such as Different, they are as much part of the production process as the rehearsals are. These introductions to technical and spatial elements were tailored into the process for Different in order to make sure that participants are safe and empowered at each stage of the production (from devising to full-run rehearsals to tech week) to be able to transition to each stage with ease and the understanding of what it entails and expects of them.

Shalyn gave us another video tour of the layout of the space at The Artground. Previously, she had talked us through a video of the performance area itself. This time she specifically focused on the peripheral areas of the space - the props and costumes area, the pantry, and a quiet rest corner where there would be placed an inflatable sofa, so that everyone got a good sense of all the off-stage areas before entering the space, where to go in order to get a nap, snacks or first aid. Shalyn carved out rehearsal time to explain these components of the off-stage area so that participants are already familiar with the way the space looks before they enter, and feel ready to immerse themselves in the new environment. 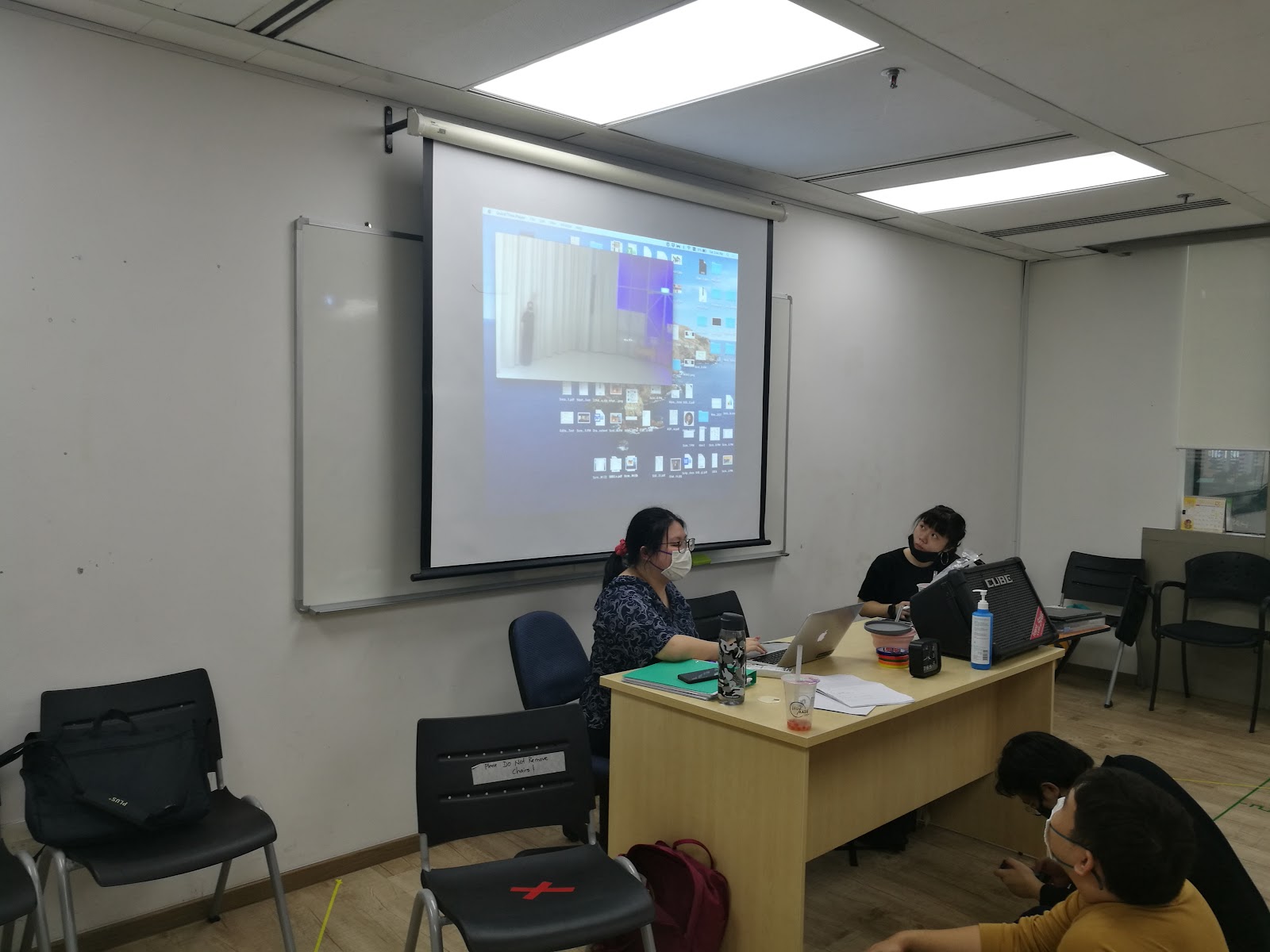 To perform in a live theatre production is complex enough; to have to film one can be even more strenuous, taking up longer hours and requiring multiple takes and greater coordination across technical elements. So Shalyn also took the time to break down the technical procedures that would take place prior to filming (soundchecks for each performer’s microphone, for example) as well as what was going to take place during filming itself.

The filming was set to take place over three days, from 12 to 14 November, and consisted of three parts:

The team then moved on to crafting agreements and safety protocol to follow if any participant feels overwhelmed by any of the technical elements. This is also an element unique to this production that isn’t typical of conventional theatre (although honestly, I do think it’s a useful practice for any kind of creative team; setting agreements safeguard the boundaries of its participants and encourage healthy communication.)

Shalyn called for about 5-10 minutes for all the performers to discuss with their partners about what they would want to include in the agreement. 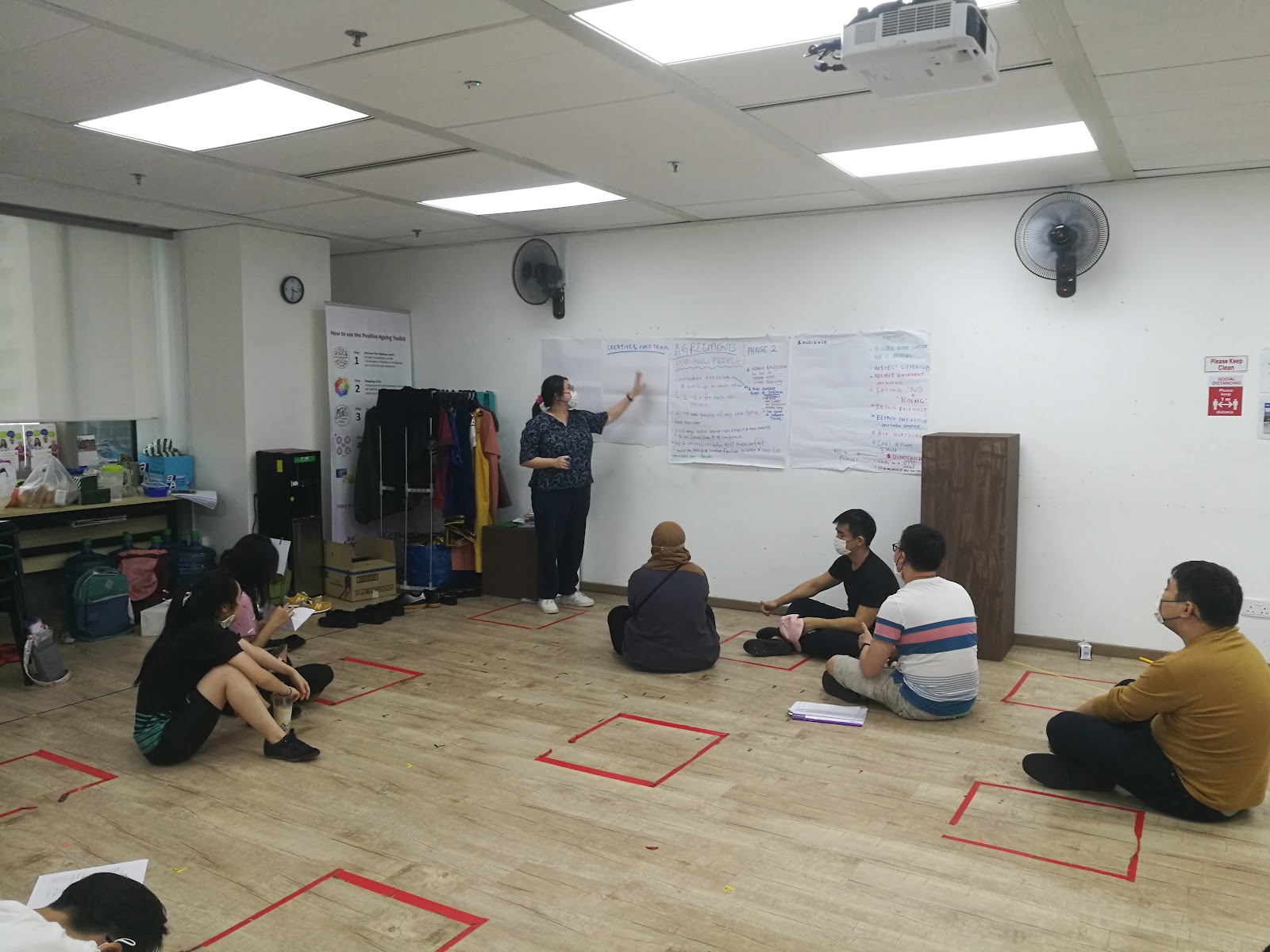 One of the new points in the agreement, as requested by one of the participants, was that there be reminders of each day’s schedule at the beginning of each session. Each of those three crucial days were going to be six to eight hours long - at least three to four times longer than most of the rehearsals had been over the past two months. Just like Shalyn would always begin each rehearsal session with an overview of the day’s tasks, going through each tech day’s procedures every morning would help reduce the overwhelm of the whole process, and start each day with a sense of clarity.

Apart from that point, most of the points in the agreement were carried over from the previous agreement the group had crafted for new people in the rehearsal space. Asking for permission before any physical contact (unless in case of danger) was an important point that was retained, as well as including the “name and adjective” introduction activity to familiarise the performers with the technical crew. While ice-breaker games like energy ball and “zip zap zop” had proven to be useful in earlier rehearsals to help everyone warm up to new people in the space, Shalyn noted there may not be time for them during the intensive schedule of tech week. In any case, they had already met the technical crew on at least one prior occasion, when they were first introduced to the workings of the lights and sounds. The only difference is that tech week would be the first time that all the tech elements would be introduced together, which might throw up new or different challenges in terms of the amount of sensory stimulation going on.

Shalyn noted that since all the technical elements would be operating together rather than separately during tech week, it was important to plan for how everyone can support each other in case anyone gets overwhelmed with the many simultaneously moving parts. I was intrigued that instead of just sticking to a broad, general set of care protocol, she laid out separate lists of protocols for the different performance processes (i.e. different protocols for tech rehearsal, scene-to-scene, full run, and another set of general protocol). The different situations would call for different courses of action and it’s about finding a balance between the needs of the performer, and the requirements of whichever performance/rehearsal mode the team is in.

Some of the general protocol laid out was that if anyone feels uncomfortable, they could step aside to have a chat with their co-actor or with SAMH caseworker Christine. They may also take food and water from the pantry and rest in the quiet corner with the inflatable sofa. If anyone needs to step out during tech rehearsals, another performer will stand in their position. If it happens during the scene-to-scene filming, the team would move on to work on a different scene that doesn’t involve that performer, returning to the scene when the performer is ready to do so.

As for the filming of the full run, which would take place on the final day, if any performer were to feel the need for a break mid-run, Shalyn suggested three possible courses of action:

(a) the full run will be paused for 5 minutes, then continue as usual,

(c) the full run will be paused for 5 minutes, and then be converted to scene-to-scene filming - starting with scenes that do not include the overwhelmed individual.

Shalyn called for a show of hands to decide which of these three options were most favourable - everyone was in unanimous agreement on the third option. She wrote out all the tech week agreements on mahjong paper and kept it pasted on the wall for all to take note and remember. 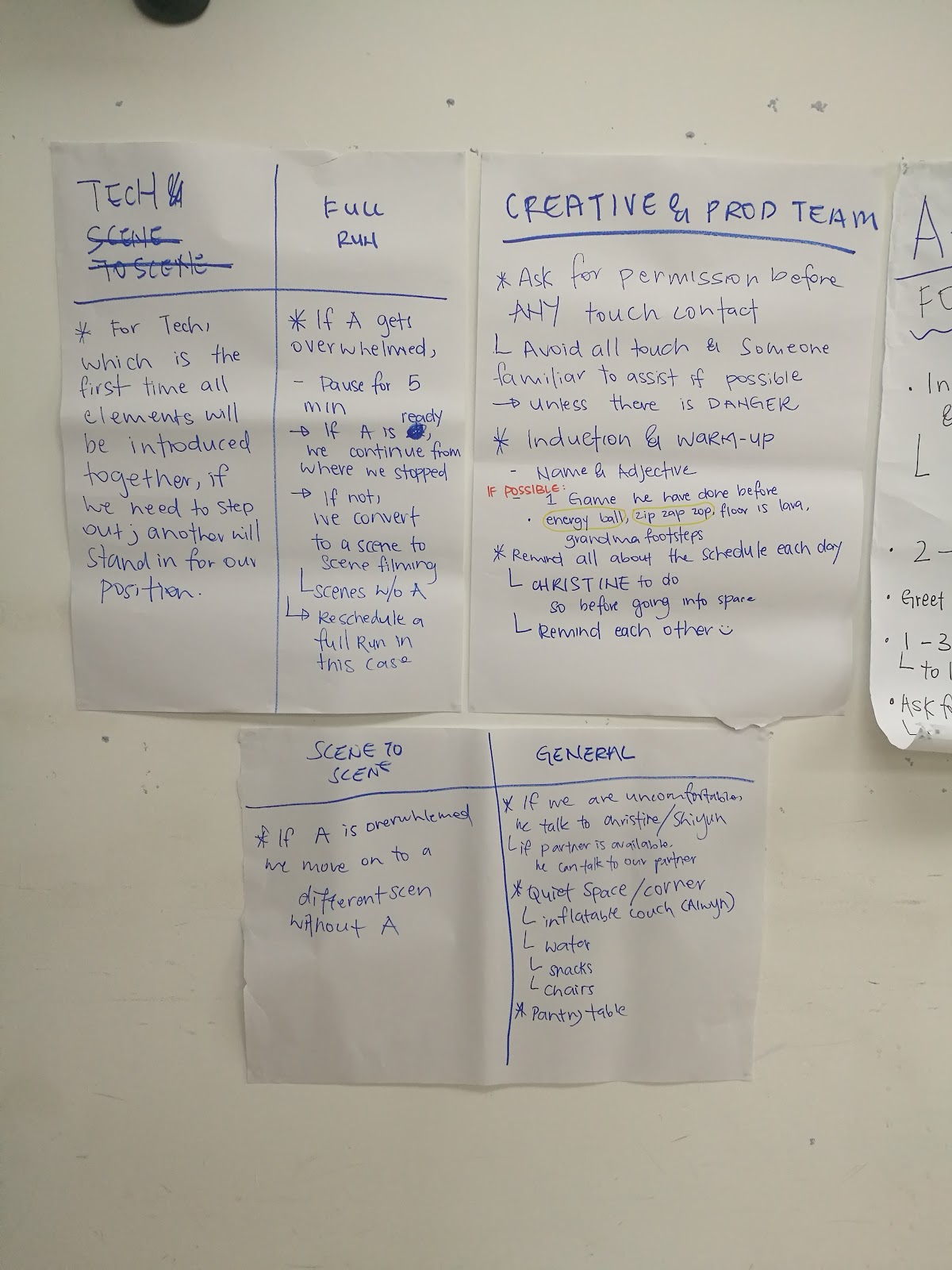 Incidentally, it was only during this particular discussion that I realised that whenever Shalyn (or any other member of crew) took a poll of the performers for any decision to be made, she would first ask everyone to close their eyes before calling the options. It seems like an obvious thing to do to make respondents feel secure about answering, but I’ve rarely seen that being done in any other context. 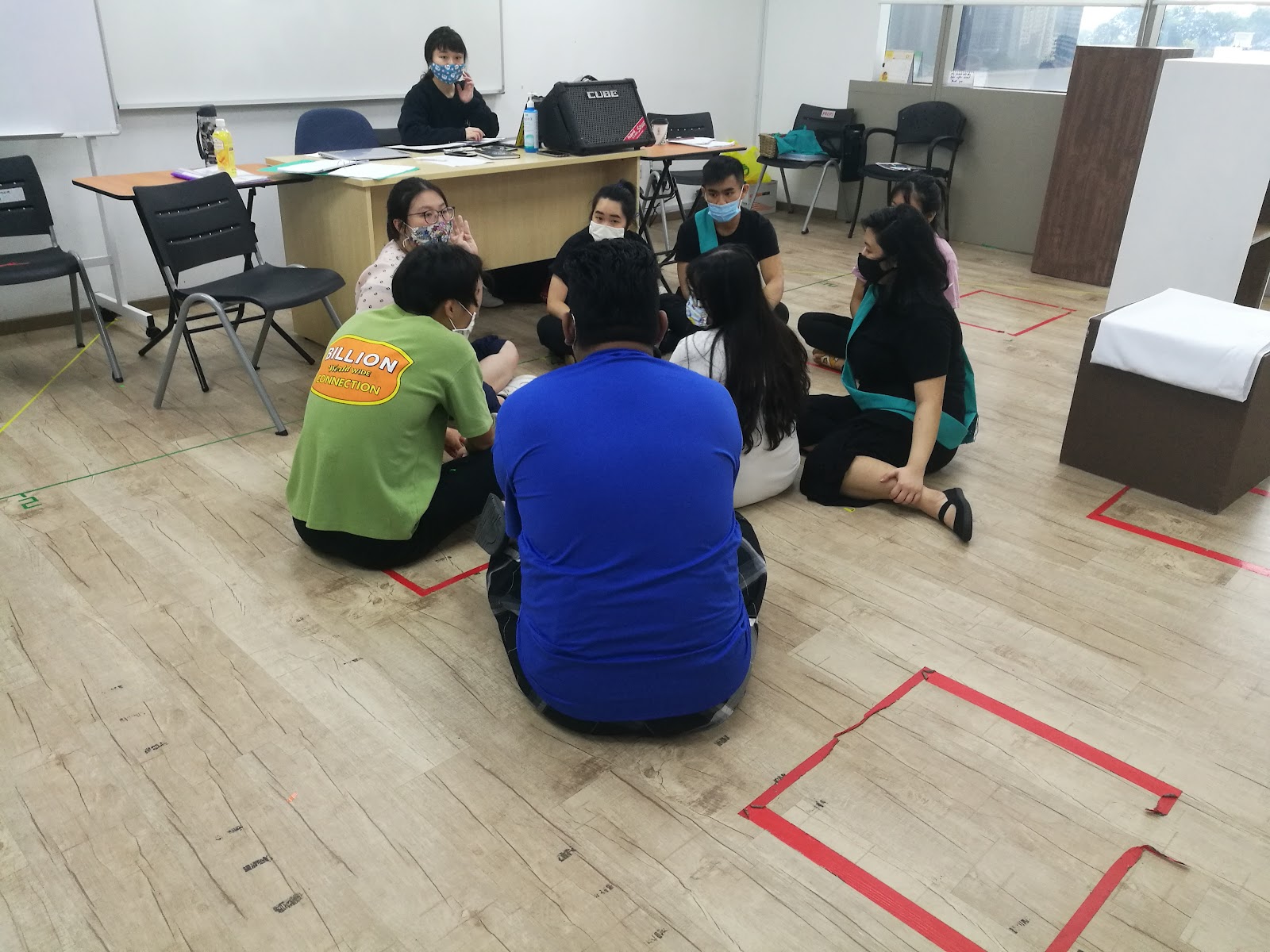 At the end of the final rehearsal at SAMH - the last one before the team bumps into the performance space at The Artground - Shalyn ended off with salient reminders to approach the looming week ahead with positivity and calmness. Even though performing in the new space and among new members of production crew may feel daunting, she reminded everyone to be aware of their energy within the space and during the performance - and that what is most important is to recreate within The Artground the same atmosphere of fun, joy and creativity that the team has fostered over the last three months at SAMH.

Certain names have been changed for confidentiality.

“Different” will be presented as part of Youth Alive! 2020, in collaboration with Singapore Association of Mental Health. Find out more about how you can attend the digital presentation here.