Over the ten sessions I was privy to, one of the key things I learned was that theatre that centres itself around people can be a portal to faraway, imaginary spaces, but its magic lies in the journey back towards yourself, to open yourself to face your struggles bravely whether they arise from external circumstances or your own mind.
December 22, 2020
by Akanksha Raja

“This goes beyond drama. It’s about being human.”

Kiyo’s words are impassioned and powerful. It’s November 14, the last day of shooting; the team has completed their final final run and supplementary retakes of scenes. The performers are seated with director Shalyn in a circle in the centre of the WhiteBox at The Artground. As they go around the circle sharing their feelings and reflections about their extraordinary journey through the past four months, the crew members have already almost entirely cleared the set, props, and vibrant lighting that had transported us all to Nagajala not more than ten minutes ago.

Over the past three days of filming, the usually white curtains and floor were canvas to a kaleidoscope of colours - the earthy green of the land of Nagajala; the fiery red backdrop to the combat scenes; the shimmery dark blue of Nagajala’s river that Ray and Gladys traverse to find Rubie, buoyed by their song of courage and togetherness. Now the curtains and floor are back to their plain white hue, but the performers’ residual energy after the rigours of the past three days has not yet dissipated. These have been the longest, most exhausting days of the production process and the team has pulled through successfully, and more importantly, with upbeat and triumphant spirits. As with any production, it was not without its hiccups, but the essence of this process lies in always getting back up and continuing with patience, resilience and the collective strength of teamwork.

I think about the weight of what Kiyo shared - for this applied theatre project to go beyond a series of mechanical drama exercises and to bring to life essential qualities of being human. Applied drama is about using specific tools to empower participants with the agency to shape their stories and experiences on their own terms. “Being human” can mean so many things - it’s not like we’re ever out of touch with our humanity while doing drama, creating characters and inventing stories. But Kiyo’s succinct remark speaks to the fact that beyond learning the tools and the rules of performance, a space had been created that allowed for humanness to unfold, a home for a creative process that worked with that humanness, rather than contorting it to the needs and requirements of a more conventional theatre-making process that doesn’t pay attention to the individuality and needs of the performers. The Still Human project has been a decidedly person-centric process rather than a production-centric one. In this space, being human, being one’s authentic self, is validated and constructively shapes each rehearsal and each decision made. I’ve also noticed it in the close relationships formed between all the participants, the way they continually check in with each other on how they’re feeling at every interval and after every scene throughout the overwhelming three-day sprint. I also notice it in the care with which Shalyn has always found a balance between a keen attention to the needs of each individual participant in the room, and the need to fulfill each session’s objectives. 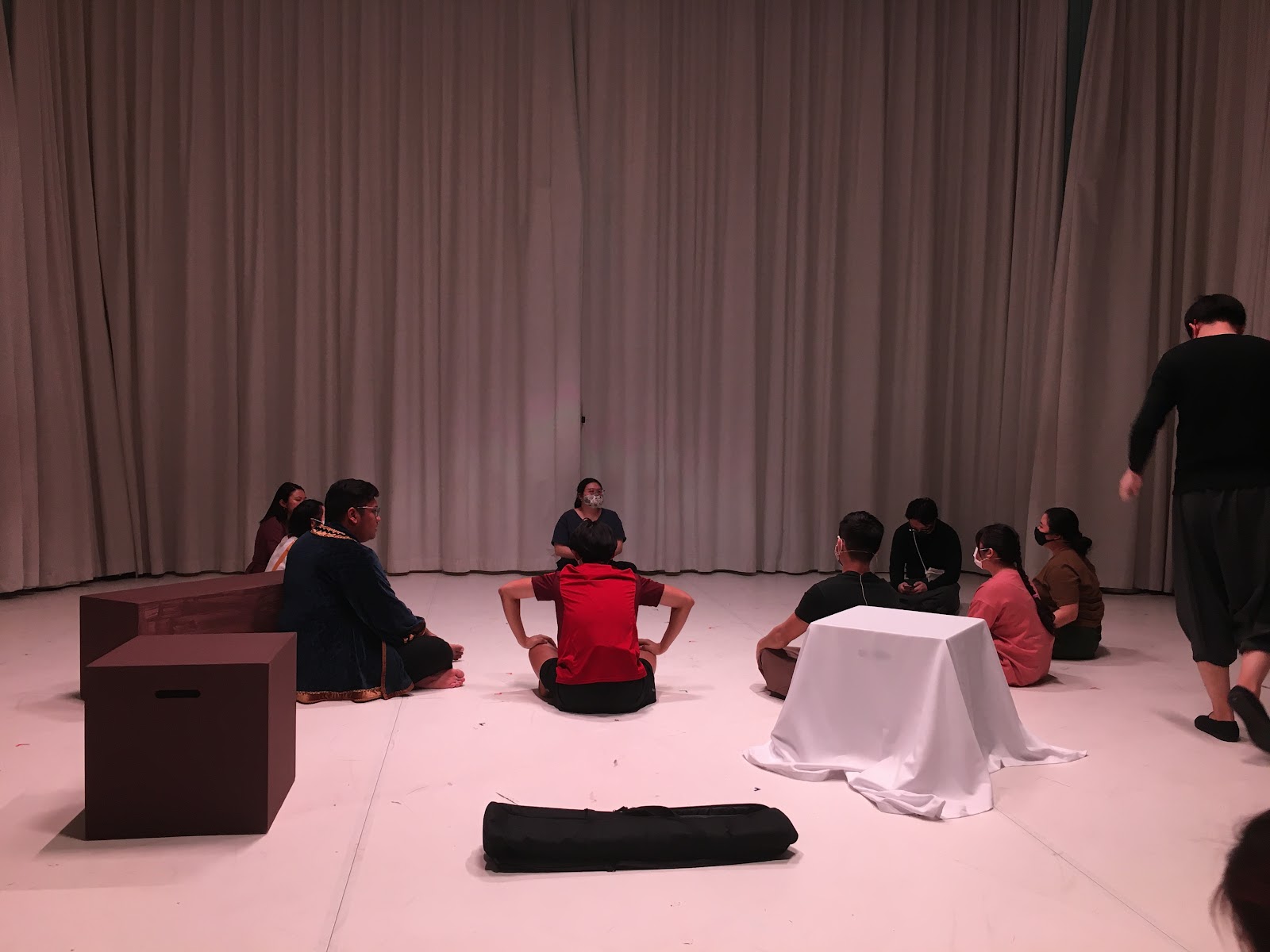 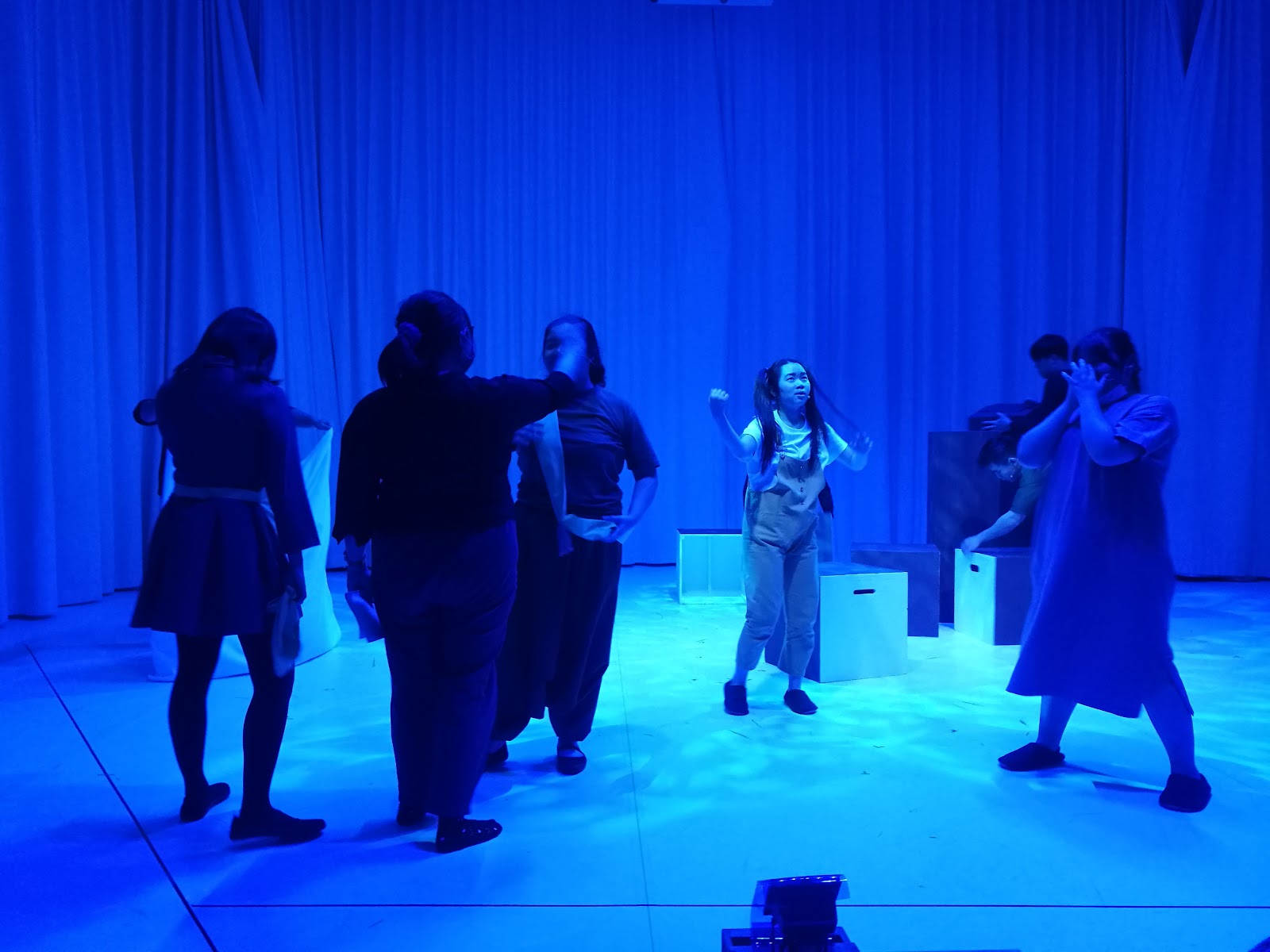 In a conversation with me a few days after the final shoot, performer Clement remarks that this was one of the reasons that rehearsals felt comfortable and safe for everyone on the team. “I believe Shalyn’s focus was always on how the participants are doing on each day. She would check in with us - how we are feeling, etc., before the session commences, and she would even adapt and change certain activities according to the mood of the group. Her presence made all of us in the space comfortable enough to share what our boundaries were, even when it may be too difficult to voice out at times.”

“Shalyn is great at doing that,” adds fellow performer Joeve, “and she makes sure to always set the tone right from the start. We all know that it is a space where everyone's voices get to be heard, a space for mutual respect and understanding. [She also] knows that having a ritual is something important for some of the participants, for example, always starting the session with the same exercise - name, adjective and action - it is familiar and consistent, therefore it is something that speaks safety.”

To ease each performer’s comfort level with sharing their feelings and thoughts with the entire team during the course of the rehearsals, a partnering system had been established. All performers would be free to share responses and thoughts with their partners first, allowing them to process them before sharing with the rest of the group. “My partner was very attentive when I communicated with them,” Clement added, “and sometimes they made the difficult conversations a lot easier!”

I ask Clement for examples of what some of these challenges may have been and how they worked through them. “I think because some of us were new to the concept of applied theatre - and some of us are also new to the theatre in general - it can take some time for us to be all on the same page. There was one participant who really took it to heart, I guess, when a mistake was made, but during that full run, they still carried on and we completed the show. At the end of it, because of the space we created, we were able to talk about how we felt, and having them bravely sharing with us how they felt brought us a lot closer together.” 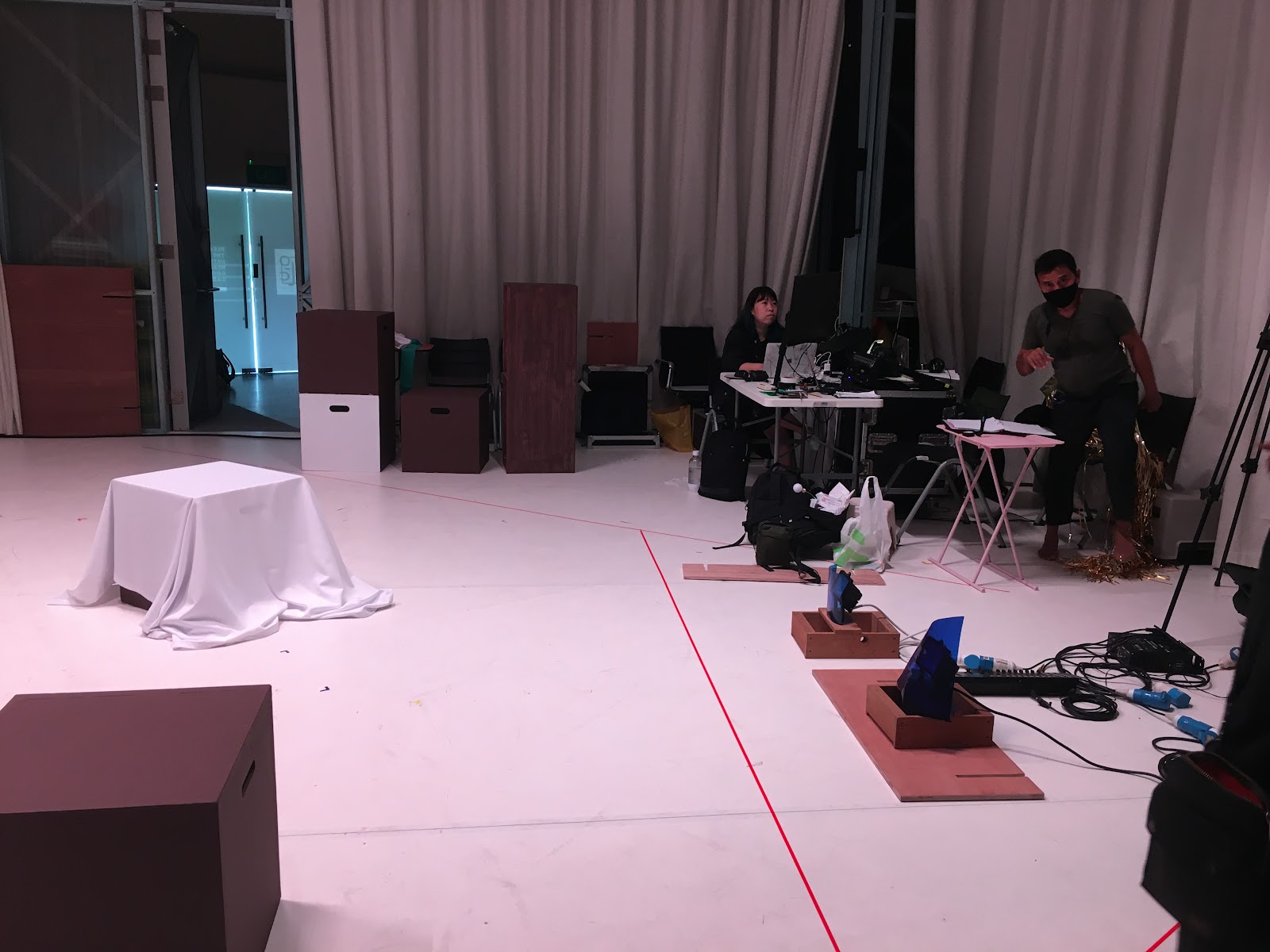 I’m reminded of some of the instances during the shoot when performers forget their lines or make missteps in their blocking. There was no rush or impatience from the crew or other members of the cast to intervene, to supply the line for the performer or to force the scene to move along faster. This was helped by the fact that the performance is made for the medium of film in which different takes can be edited and stitched together, but even so, considering the long hours of shoot and scenes being performed over and over again, everyone’s calm composure and generous spirits in the face of setbacks were commendable. At another point, a performer twisted their hand in the combat scene, which led to the performer playing the character's aggressor to hold themselves back in subsequent takes out of guilt. Shalyn was quick to pick up on this without the performer articulating it, and reassured them that they were not to blame for the injury and that they should stay true to the character and their aggression and force.

Joeve adds that this level of closeness and understanding wouldn’t have been achieved without “the trust of everyone in the space, for being so readily accepting of one another.” It was essential for everyone to remember not to ridicule or dismiss another person’s feelings. “We listen, we hear, we feel. First, you need to acknowledge your own needs. Next, you voice out what you want or how you want to be taken care of. Then, as a group or collective, we go through them together.” 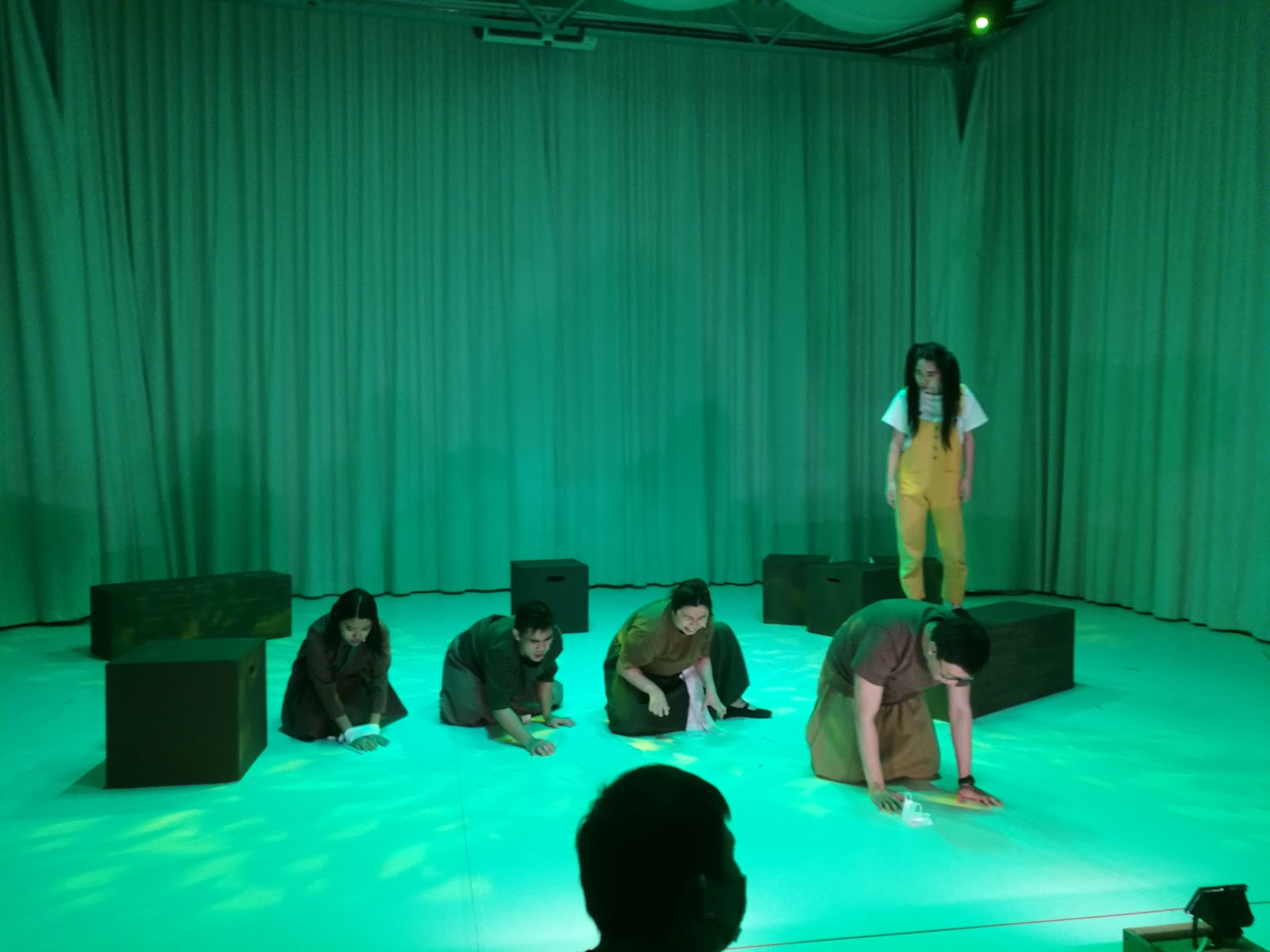 A few performers remark during the reflection circle, as well as in my personal conversations with them, that the group has come a long way in bonding together and building trust, since the very first time they met when “everyone was so shy and awkward.” Now, they’ve grown together in unexpected and surprising ways through the course of rehearsals. Some of the performers who had more training in theatre had the expectation that they would play a supporting and encouraging role for their partners who had little to no training. “But to be honest, I feel like it has been the other way round at some point,” shares Joeve. “There were moments when I felt my partner had supported me most of the time instead.”

She recounts instances during rehearsal in which she was “not able to nail down scene transitions, and I faulted myself for it. I was not able to forgive myself, feeling like I had ruined the whole run. I guess [my partner] could sense it - she offered to accompany me to the toilet during costume change. On our way there, she shared with me how she manages such emotions. Her words: ‘It is ok to not be ok, we just need to learn to move on and be better.’   I remembered how she ended off with a ‘Hey man, no worries at all, this is what partners should do for each other, right?’ It meant the world to me at that point of time. Everyone is readily available to help each other.”

At the end of the last day of shoot, the group does a final round of transitioning out of their characters, but with a slight twist. Shalyn asks each of the performers to “keep” one positive trait from their character, so each performer would say "I'm not [character name], but I would like to keep their [trait].” As the group went around sharing what they most admired about their characters, we learned how even the seemingly antagonistic characters from the monstrous otherworld had valuable traits, such as assertiveness, boldness, resourcefulness.

I thought back to the first few rehearsal sessions that I sat in on, during which the story was still being devised. I was mainly curious then about how serious human struggles like obsessive-compulsive disorder, stigma and discrimination could be addressed in a fictional, fantastical narrative about dragons and magical lands. How do these characters and these places have anything to do with our lived realities?

Over the ten sessions I was privy to, one of the key things I learned was that theatre that centres itself around people can be a portal to faraway, imaginary spaces, but its magic lies in the journey back towards yourself, to open yourself to face your struggles bravely whether they arise from external circumstances or your own mind. So whether you’re a young girl struggling with OCD, or a monstrous but compassionate creature trying to find a way out of the chaos of your society, or water-breathing dragon king learning to accept himself and to be kind, you are, at the end of the day, always still learning what it is to be human.

Certain names have been changed for confidentiality.

The Still Human project culminated in ‘Different’, presented at YOUth Alive! 2020 on 28th November 2020, organised by the Singapore Association for Mental Health.